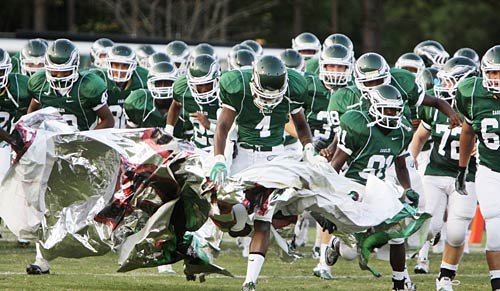 SUWANEE, GA– The goal is to win state. The Eagles’ 2015-2016 season didn’t quite begin as expected. Despite an 0-3 start, the team overcame adversity and found themselves in the run for state. Their season came to an end in the third round of the state playoffs. They lost a close battle to the Roswell Hornets 17-10. Overall, Collins Hill finished with a 7-6 record.

As we all know, the past is the past. The Eagles’ have their eyes on the quickly approaching 2016-2017 season. When asked about their hopes for the upcoming season, tight end/wide receiver Brendan Koerner stated, “We want a region championship. Then, we obviously want a ring”.

Running back Evan Anderson said, “The dome is always the goal. We’re ready to grind”.

Quarterback Coach, Jason Conner couldn’t have agreed more with his players’ statements. Coach Conner said, “We (Collins Hill Football) always set our standards high, to win a state championship and a region championship. We measure ourselves by the best in the state and we feel as if other programs do the same”.

The off season is where all the magic happens.

Running back/wide receiver Anderson stated, “Summer practices have been very hot, but beneficial. Everyone has put in a lot of work. We’re preparing to grind this season. We’ve been working on lots of footwork and muscular endurance”. Tight end Koerner chimed in and mentioned how common ladder drills have been this summer.

The University of Georgia hosted four 7 on 7 tournaments this summer. Collins Hill earned 1st place out of a 12 team field. The coaches were impressed. Coach Conner said, “7 on 7’s are long days. There were times where our guys had to show a lot of grit and determination. We also saw that there are a lot of guys that haven’t played on Friday nights that can step up and make plays”.

It’s no secret that the team had many key starters in the 2015-2016 season that won’t be returning for the upcoming season. They’ll be continuing their dreams to play at the collegiate level.

So how will their shoes be filled? Coach Conner said, “Well, that’s always a question. We’ll just have to wait and see who steps up. We’ll work on depth the first part of the season”. He also stated, “A lot of times you don’t have a great player to replace a great player. There can be groups of players that step up and we can utilize their strengths differently”.

Offensively, the Eagles’ have both quarterbacks returning, Drew Dinsmore (Sr.) and Monty Horn (Sr.).  According to Coach Conner, a starting QB has not been named and won’t be decided until after the preseason scrimmage. He said, “Both players are college football players. They’re both great. They both deserve to play. We’ll just have to see whose playing best at the time”.

At 6’5” and 210 lbs., QB Drew Dinsmore, has an offer from Eastern Kentucky and Cornell University. According to maxpreps.com he threw for a total of 1043 yards.

Peachtree Ridge vs. Collins Hill. It’s one of the biggest rivalries in Gwinnett County. When asked about which game the Eagles’ are looking forward to most, the answer was instantaneous. Coach Conner said, “You ALWAYS look forward to Peachtree Ridge”. Players, Anderson and Koerner, agreed with Coach Conner’s statement with excitement. Last season the Eagles fell to the Lions 28-13.

Maddie Schmidt is a sports content creator with a journalism background.  She is a self-starter with a passion for communication and storytelling. Schmidt is currently pursuing her dream of making a mark in the sports industry.